Spawning streams were already being destroyed as early as the Gold Rush days by hydraulic gold mining, railroad construction and lumbering operations. These activities left many streams badly silted or blocked by debris ///// Katmai National Park, Alaska, USA
July is all about the falls here at Brooks Falls. In the pre-salmon spawn days, this fall line acts like a speed bump, and delays the salmon’s arrival at its spawning ground. This bottleneck also happens to be the spot where the bears are at their highest concentration. This is an explosive time in Katmai National Park. The salmon leap over the falls with explosive vitality, the instinct to spawn. While the bears, waiting at the falls, are driven by their own instinct to make weight for the winter. The urgency to gain fat stores is demonstrated by how quickly the bears move to catch fish and react to the dominance hierarchy. In this photo, a full grown male shakes his wet head, with fish in mouth, at an astonishing speed, spraying water and roe in all directions away from the bear.
Canon EOS 1DX, Canon EF 600mm f/4 L IS II USM, AquaTech SS-600 Sport Shield Rain Cover, Gitzo Tripod, RRS Panning Gimbal Head
1/4000s; f/6.3; 600mm; ISO800 Post Processing done using Lightroom 5.7.1 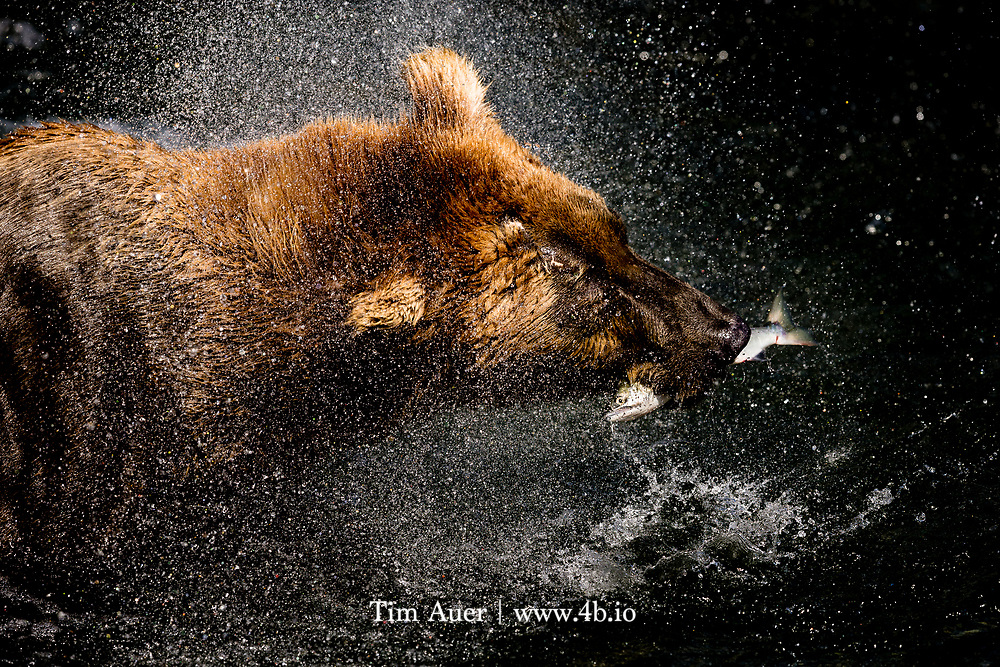