Eagle on the Green
Bald Eagle
McNeil River State Game Sanctuary and Refuge, Alaska
McNeil River, which is run by Alaska Department of Fish and Game - Official, is considered to be one of Alaska's preeminent brown bear viewing locations. While this is is widely known, this park, which is , is not a one-trick-pony. Perhaps slightly less well known is the world-class eagle viewing it offers.

The great thing about the eagle viewing here is that you can look DOWN on the flying eagles. Literally. It is possible to view them from a vantage point that is above them. In June, there is an early season run of sockeye in Mikfik Creek. The Mikfik system is much smaller compared to the McNeil River system next river over. This means less fish compared to the river's July chum run. Nevertheless, the presence of salmon in a stream has a magic effect to bring out the bears. And fishing bears bring out other animals; such as the bald eagles.

What was unusual about these fish eagles was that, as far as I observed in my time there, they didn’t fish much! They were perfectly happy to let the bears do it, and would scavenge the scraps, and squabble with the gulls. Even when a fish was splashing in 3 inch deep riffles with its back above the water- and no bear in sight- the eagles still seemed to prefer to let the bears do it.

As for the top down viewing, at Mikfik falls marks the start of a steep gorge. The creek is only a few feet wide here, and the gorge has grass-covered slopes that are 30-40 feet high. As eagles swoop down to the creek to collect the scraps it is possible to view them flying from above. Here an eagle is beginning its swoop down to the creek.
Post Processing done using Lightroom version: 6.1.1 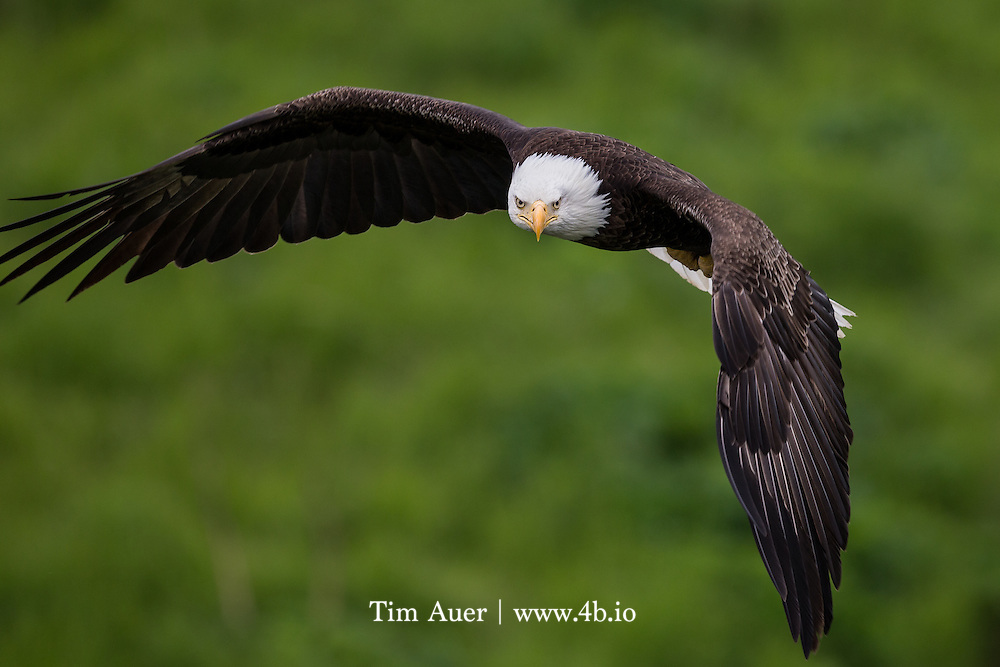