Take notice of the cloud-diffused sun reflected in its eye. The sharp claws on the snowy forepaws, useful for digging and clinging to prey. The droplets of water on its whiskers. The capillaries in its ear.

This is not an easy subject to photograph, especially in winter! They are quick, clever animals with near perfect camouflage. The only weaknesses in its winter appearances are its three black spots: two eyes and the tip of its long tail. If it weren’t for those black areas and the weasel's natural curiosity; I never would have managed to get this image.

I was on my annual photo trip to Yellowstone with my parents. While driving slowly near Tower Junction my mom and dad in the front seat first spotted the weasel, or more accurately, observed its black tip bouncing across the snow-covered road in front of us. They told me “Ermine. 6 o’clock. Go!” I exited the backseat of the now parked vehicle with silent haste, and began to scan for the weasel’s characteristic tracks in the deep powder snow. Like the weasel’s fur, the scene lacked contrast. White on white on white, with an occasional stray sagebrush poking above the snow. After scanning the scene for what felt like an eternity, but in reality was seconds, I spotted the tracks and followed them with my eyes to a tiny hole where they ended. The weasel was nowhere to be seen. I prefocused my lens on the hole and assumed the opportunity was lost. As I scanned the area around the hole, I noticed two small eyes in a different hole closer to me, the weasel had reappeared and was looking at me. I trained my lens on the hole and manually focused but couldn’t achieve focus. The problem wasn’t lack of contrast, I was within the lens' 4.5m minimum focus distance. I leaned back as far as I could and hoped the weasel would give me one more opportunity. As I peered through the viewfinder, the weasel shot up, surveyed its surroundings, did a 180-degree turn, and vanished.

This entire encounter, from fir 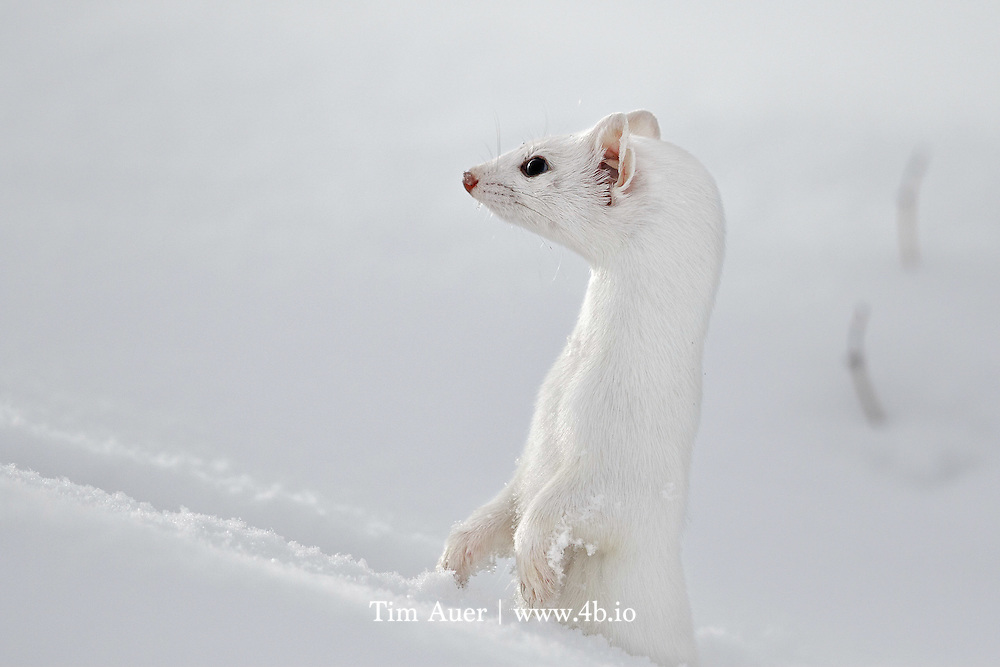