King of the Mountain
Polar Bear
Svalbard
Spotting wildlife is never guaranteed. In fact, at times it feels like Mother Nature is actively advising her creatures to hide from me. But every now and then, she surprises you with a scene that goes beyond your wildest dreams. This was the case for these courting polar bears in the high arctic.

On the final full day of my 11 day Svalbard expedition, we sailed to a location not typically known for hosting polar bears. I was sad that, in all likelihood, I had already seen the trip's last polar bear. But it had been a good trip for bears; with 20 or so sightings around the archipelago, and the weather on this day was great. The low angle polar sun provided perfect photographic conditions. Lots of light, blue sky, and puffy clouds. We manned the zodiacs with the goal of bird photography. I observed these two bears and the agenda quickly shifted….

In this scene, a large adult male bear is following an adult female. When the two were in frame, the sexual dimorphism between them was striking. But despite his substantial size advantage, the male behaved like a nervous teenager that lacks the courage to ask for a date. The female played it cool. Mostly ignoring him as she sniffed the beach, occasionally giving him a playful glance back. This ballet went on for over 2 hours. These bears had each other’s full attention; my zodiac and I weren’t given a passing glance. Here the male polar bear appears to be sandwiched between the clouds and the red earth, as he moves in the direction of the female. A white bear is supposed to be on white snow or ice, but this photo may be representative of what our future holds in a warming climate.

The famous polar bear warning signs posted in Svalbard have the Norwegian words: "Gjelder hele Svalbard” and the image of a polar bear. Which means “Polar Bears to be found all over Svalbard”. The sweetest words in the Norwegian language rang true here, as this was not a typical polar bear ha 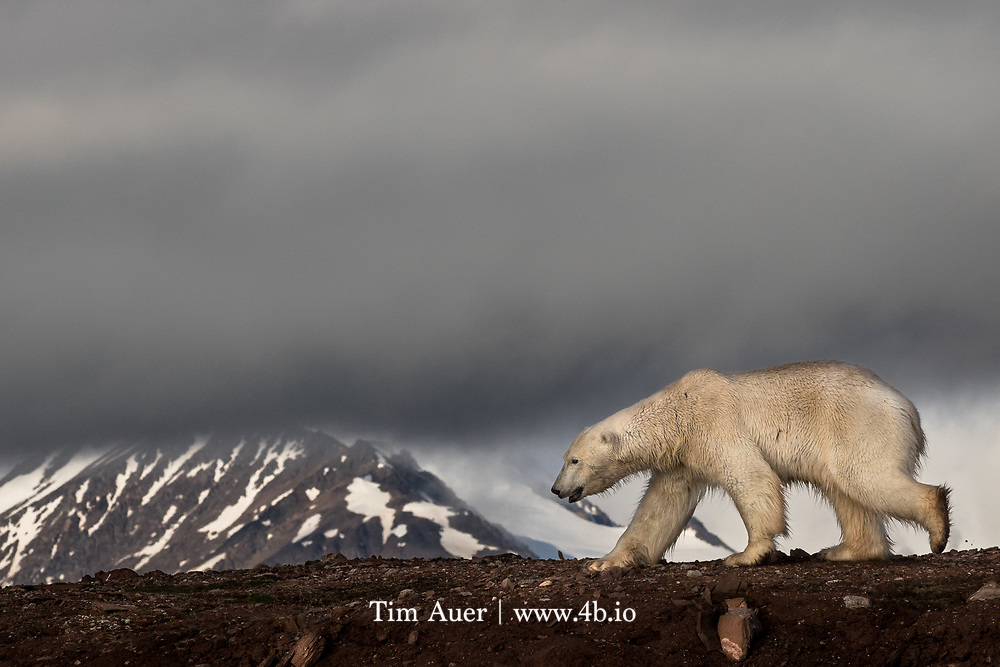