Yosemite Valley is one of America's most iconic places. It is also one of its most visited areas within the US National Park Service. The scene depicted here, known as Valley View or Gates of the Valley, is easily one of the park’s most photographed vistas. Yosemite Valley can at times resemble a small city, with its buses, garbage trucks, and population masses. It is rare to be alone here, and even rarer that there are no cars driving through the valley, spoiling the illusion of isolation. In this shot, I was able to expose for 239s, and wait for the critical moment that the moon began to peak above the Cathedral Rocks formation, creating this surreal image.

The moon was scheduled to rise at 22:13, at the horizon, but wouldn't make it above the high valley walls until well after 23:00. Arriving well before this time, I took advantage of the low flowing and still Merced River to set-up my tripod out in the river in the pitch dark. Seizing the opportunity to shoot from vantage points typically inaccessible at other times of the year when the water volume is higher, and providing less reflections. The conditions weren't particularly easy to shoot in. As can be observed in this photo, across the river, waves of fog and mist would glide across the valley floor in irregular intervals, influencing the air temperature in the process. Before the fogs, it would be a few degrees below freezing, as the fog rolled past the temperatures would rise slightly above freezing, only to drop again after it was gone, and leave a thin coat of ice on my lens. As the frequency of “frost fog waves" increased, I had to drastically decrease my exposure times to allow lens defrosting. In the time leading up to this shot the scene went from pitch dark, to a gradually increasing moonlit twilight that backlit the valley’s features. Finally the moment came, and the moon rose above the Cathedral Rocks and spilled its soft light onto the valley floor and the glacially carved valley featu 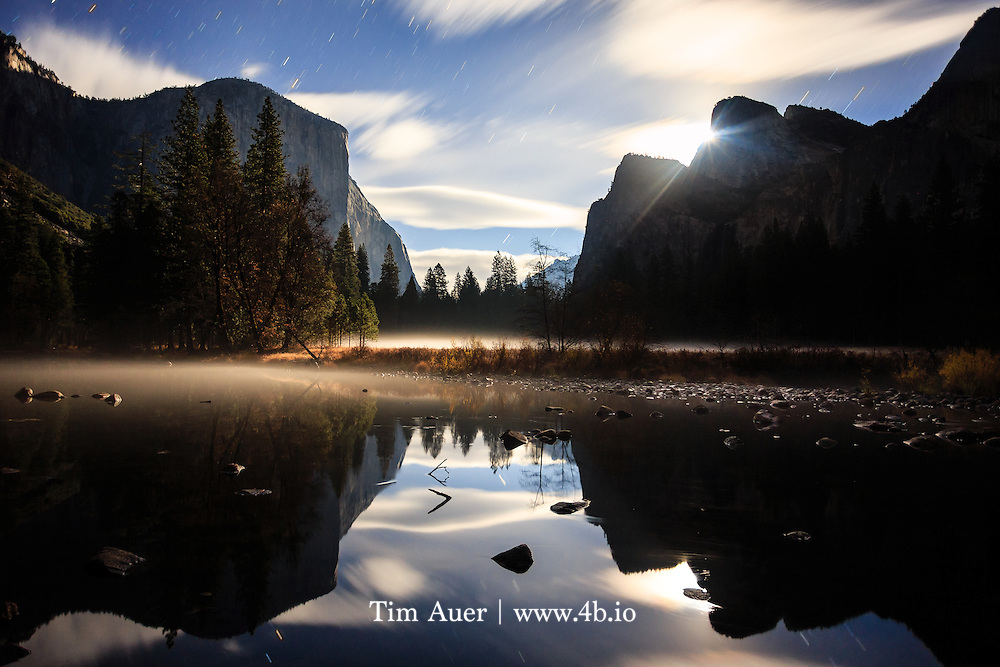