Only those able to see the pageant of evolution can be expected to value its theater, the wilderness, or its outstanding achievement, the grizzly. \\/// Sept 8 2013
I was breaking camp at dawn on my last day in Katmai National Park, Alaska. From the look of the morning twilight and wispy cloud cover, I knew the day's sunrise would be spectacular. It was the first morning of the trip it wasn't cloudy or raining. When I set up my tripod and composed, it was still mostly dark out. As the light increased, I saw a large brown bear about 400 yards away on the beach, walking towards me. If the bear followed the shore all the way past me, I knew it would be the shot I have dreamed about; the quintessential Alaska photograph! As he approached, I quickly moved my gear back, without frightening him off or putting myself in danger. Crouching in the bushes and watching him, I recomposed and waited for the right moment. As the bear passed and I clicked, the sunrise colors were peaking in their vibrancy. Photographically, I underexposed the image to capture these colors, and make a silhouette of the bear. The shutter speed was slow enough to capture its forward motion with the blurry paw, but fast enough to freeze the identifying characteristics of a brown bear- muzzle, ear, hump. In the foreground the beach is strewn with sun bleached driftwood reflecting some of the pink light, and in the background the low lying clouds in the Iliuk Arm of Naknek Lake still hold onto their shadows. Katmai is one of my favorite national parks to visit, and this photograph precisely captures the reason why. Finalist in 2014 Washington Post Travel Photo contest 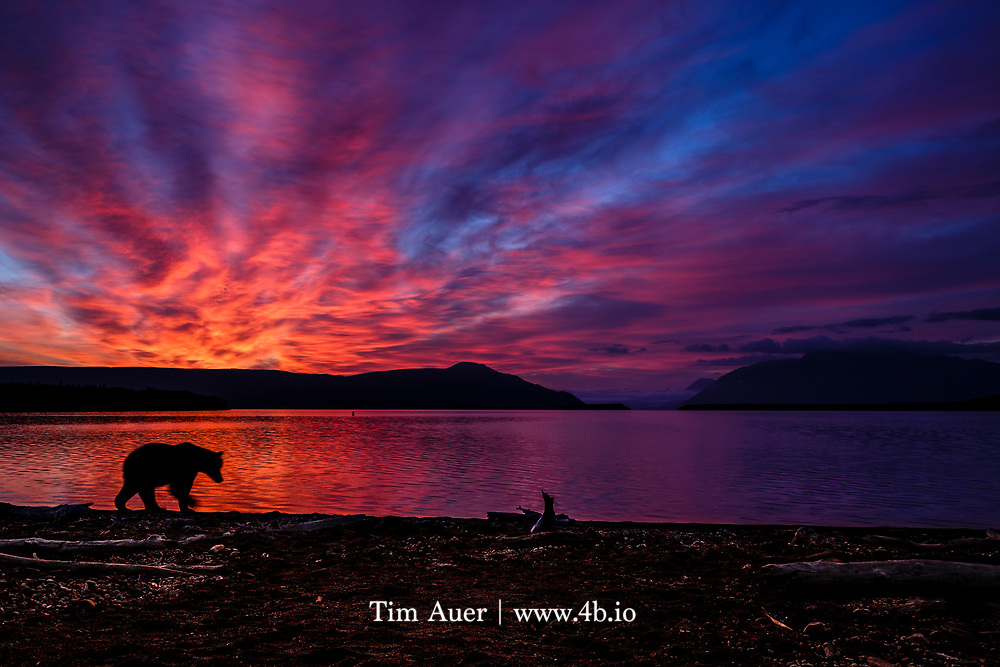